The trip to Cornwall was not that big venture, because the peninsula is located not so far from the place where we live. The peninsula is small thus we planned our trip only for a few days. We decided that we leave on Wednesday after work. I finished my work a bit earlier and we set off, to get to our destination. Late in the evening we arrived at the campsite, from where the next day we started our adventure.

After a good night’s sleep we quickly got on the bike in the search for a breakfast. We did not have problems with finding a shop. The problem was finding a place for a picnic. As it turned out it was always our problem, as in Cornwall you won’t find specially designated picnic sites, which caused difficulties for us, but we managed somehow (using parking bays, bus stops or benches in the town centres). 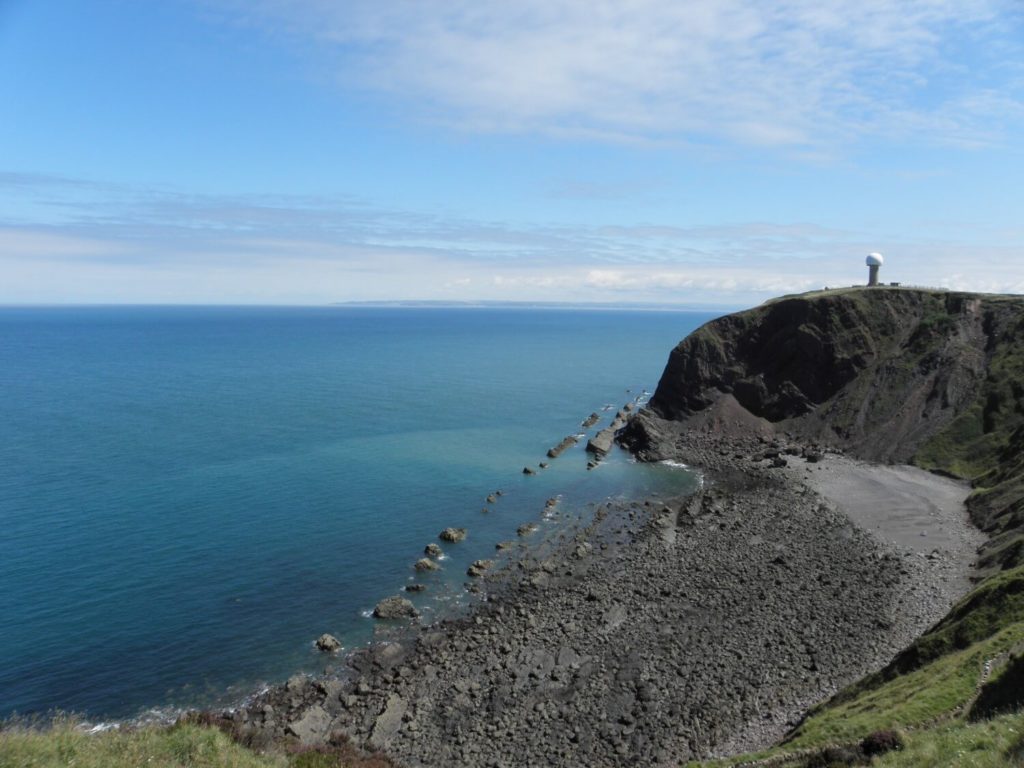 From the main road we turned into a side road, which led us through the Exmoor National Park and offered a joy for our eyes. We stopped from time to time at viewpoints, to make some photos. Finally we arrived at Barnstaple. From now on, we decided to keep closer to the coast. For the next stop we choose – Hartland Point with lighthouse. The weather was on our side. It was nice to bask in the sunshine and enjoy the view of the ocean. 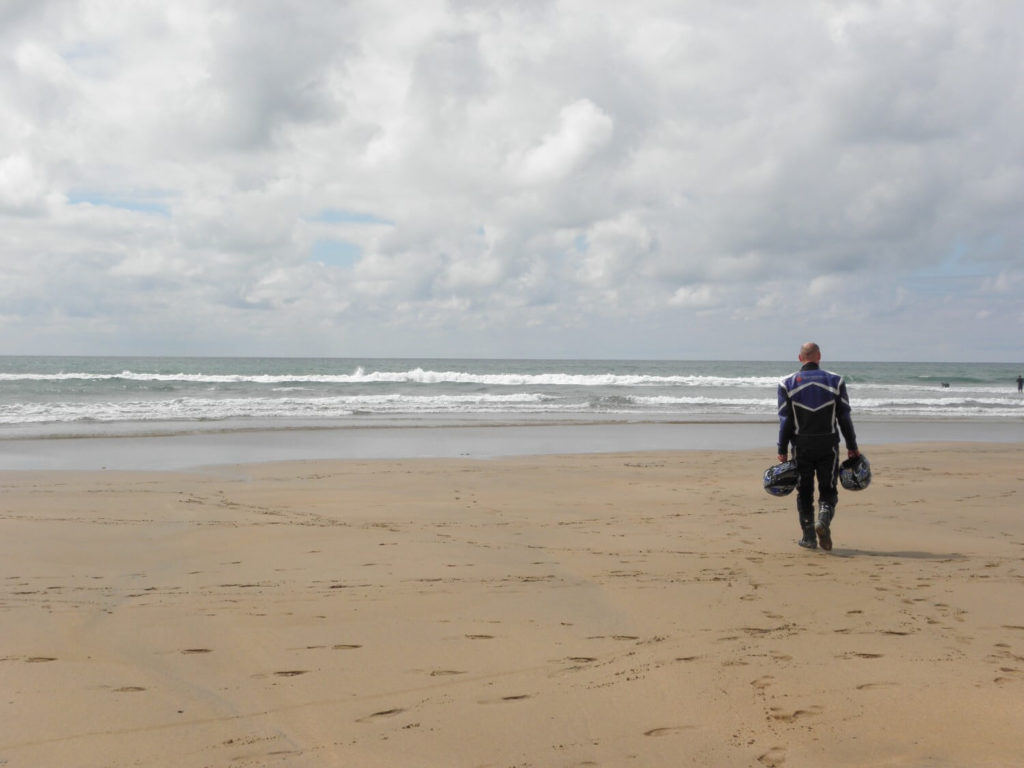 That day we also stopped at Sandy Mouth beach near Stibb. Sandy beach surrounded by high cliffs and rocks is characteristic for Cornwall. Later on we tried to find the Devil’s Bellows, but we’ve not been successful. We arrived at Tintagel – the town with the ruins of the castle, where we decided to stop. After setting up the tent we went for a walk along nearby cliffs. All around peace and quiet, as if the life had slowed down. 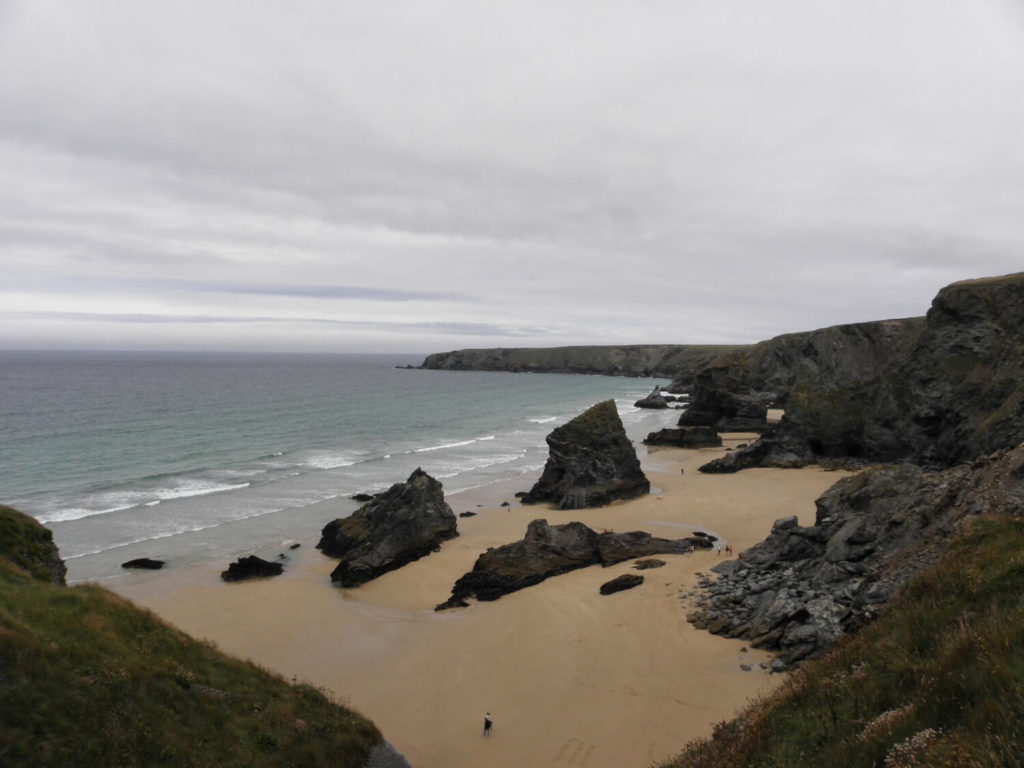 In the morning we wanted to see the ruins of the castle, where King Arthur was born and raised under the guidance of Merlin. Unfortunately, it was still early in the morning, and we did not feel like waiting two hours just to see the ruins, so we moved on. Following the main road through Wadebridge and Padstow we got to Bedruthan Steps and the local beach. Steep stairs led to the beach. The beach itself is one of the best we’ve seen in Cornwall. The blue ocean waters smoothing the sand and crashing against the rocks, rock formations “scattered” on the beach. We had a nice time there.

Next we arrived at Newquay, which is the most popular surfing centre on the British Isles. And indeed it was, the beach was full of surfers. 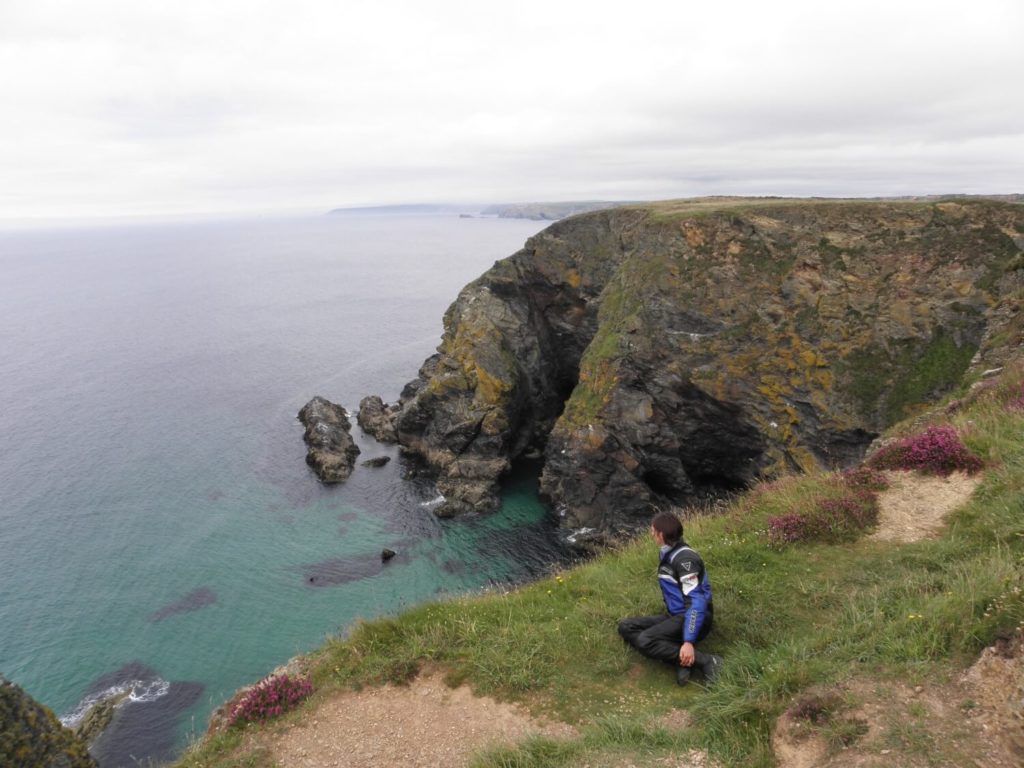 As we did not have the equipment with us:) we moved on. Through Redruth we went towards Portreath, where we stopped to see a nice beach. Today’s attraction was also a view point near the cliffs formation called Hell’s Mouth, which made a great impression on me. The view point offers spectacular views. Not so far away there is the Godrevy Point with the lighthouse on small isle, which looked fabulous against the dark sky and the stormy ocean. Full of positive energy we went on along the cost through the St. Ives and we camp somewhere near St. Just.

That day was full of attractions. Early in the morning we headed towards Land’s End, the westernmost point of the Great Britain. There is a big tourist centre. Fortunately we were there early in the morning, so there were no crowds. We walked along the coast, admired the views, made a must-have photo at the famous sign post and moved on. 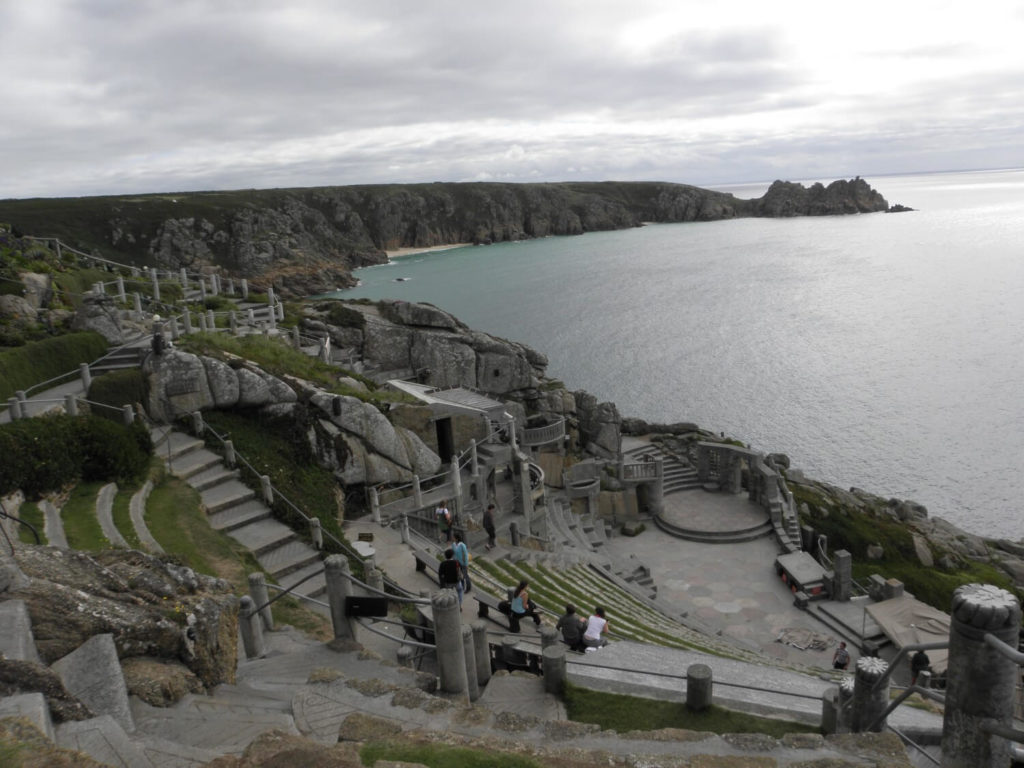 Another attraction was the Minack Open-Air Theatre, which really stayed in our memory for long time. This amphitheatre is carved into the rocks of the cliffs, on which the ocean waves are crashing. A very magical place, and any picture won’t show the beauty of it, you just have to see it for yourself. We recommend, because it is really worth seeing. During the summer season the plays are staged there, which must look impressive.

Next we headed towards Marazion, stopping by the stone circle on the way. This time the attraction was the St. Michael’s Mount castle located on the island. It is very large and well-preserved castle. The low tide reveals a stone path on the bottom of the bay leading to the castle. When the water level is low, you can simply walk to the castle, wading knee-deep in water. Unfortunately the castle is not open on Saturdays, so we could not visit it.

Another attraction was the Lizard Point. But before we got there we stopped at the beach near the Kynance Cove. 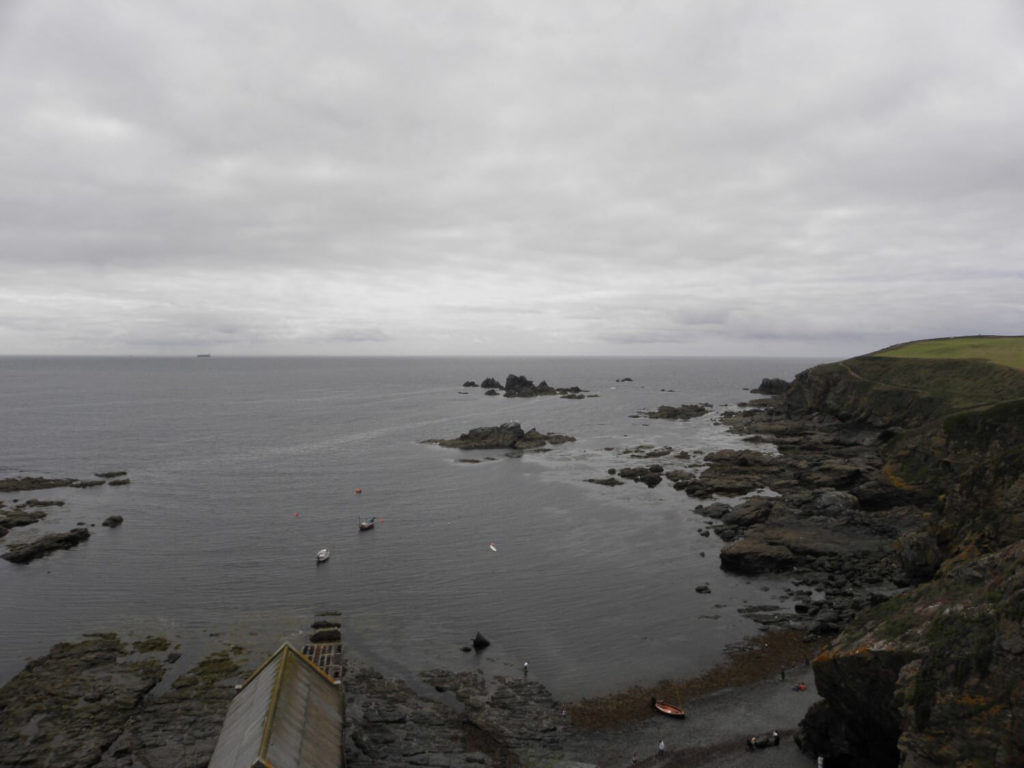 To get to the beach you need to walk a short distance from the parking, but then you can admire the cliffs and spectacular views of the surrounding landscapes. Lizard Point is the most southerly point of the Great Britain. There is the oldest lighthouse on the main land and from there you can watch the sea lions basking on the rocks nearby. In the Lizard village for the first time we ate Cornish Pasty – a local dish that looks like huge dumpling, with meat or vegetable filling, which has become our favourite food of the trip.

At the end of the journey yet another attraction – Eden Project, which is a botanical garden created in a reclaimed china clay quarry. 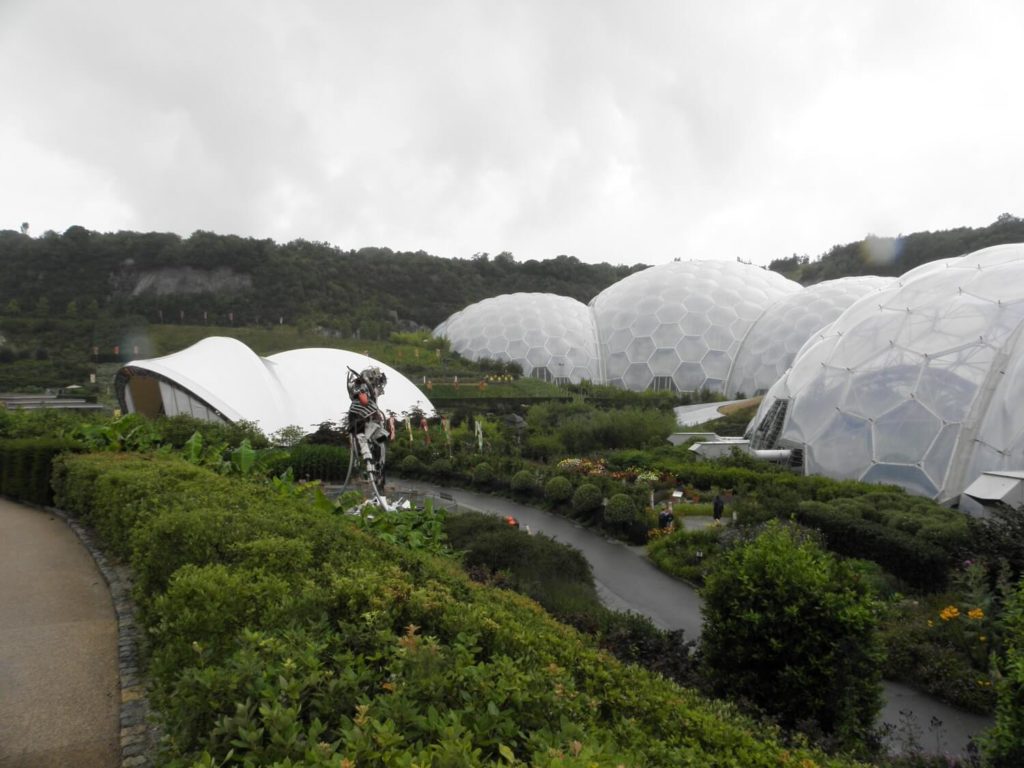 There are 18 thousands species of plants from several climatic zones of the world. The complex is dominated by geodesic domes. It does make an impression and it is worth to spend some time to visit it. Unfortunately on that day it rained, but it did not spoil our pleasure of exploring that place.

Then we set off in the direction of Leicester, driving through the Dartmoor National Park. Late in the afternoon we got home fully charged with positive energy. The trip was very successful.