After little preparations we reached the Green Island. A wake up at 5 in the morning after a totally sleepless night was not so great, but it did not spoil our good mood. We got on the bike and set off: 200 miles to the port at Holyhead. On the way a little surprise: a nice drive through the Snowdonia – a joy for eyes.
We took the fast ferry and within 2 hours we were there. We had some problems getting out of Dublin, as the roads were poorly marked. Once we thought that we were out of town on a beautiful road, it took us back to Dublin. But after several attempts we succeeded. 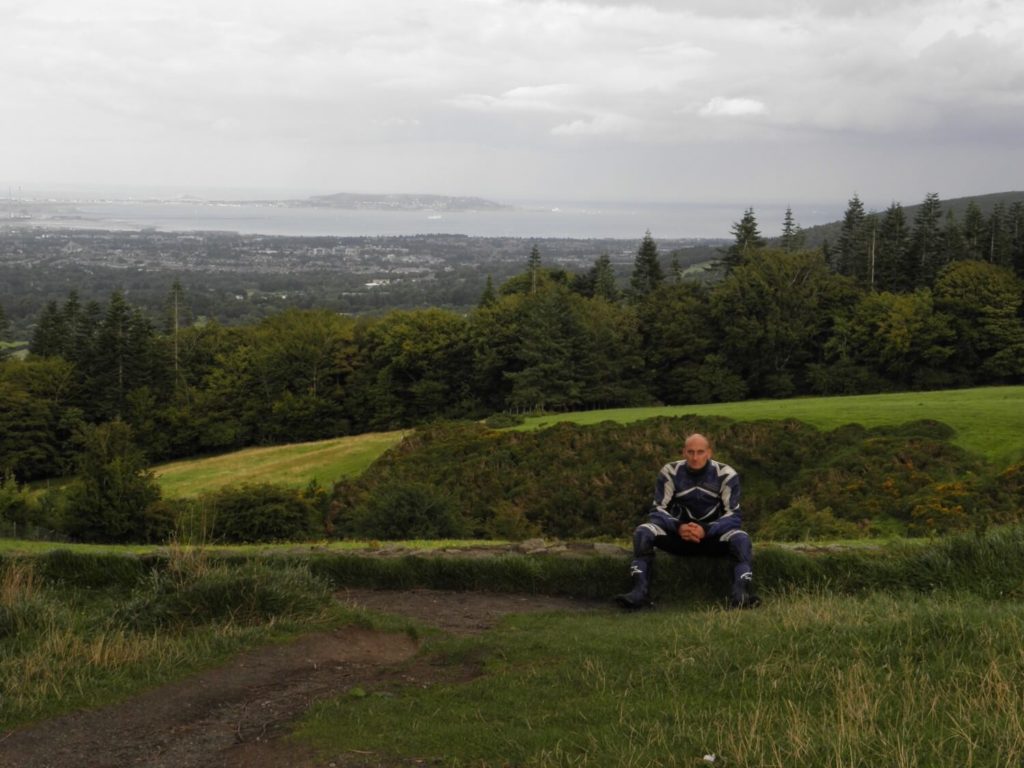 Dublin itself did not impress us, the city generally unkempt, poor road markings, so we gladly left that place to see the nature. We followed the road R115 through the Wicklow Mountains – the road – or rather wilderness, all around just hills, whole parts covered in moors. The wind blew a little, the road was not the best quality, but the views compensated any inconveniences. Today we did not have much planned – only to get out of Dublin. Quite early we found a campsite (with cold water unfortunately) and we quickly fell asleep hoping for new adventures the next day.

222 miles, of which 222 miles in the rain. From a drizzle to downpours, and so on, all day long. Fortunately we were able to take advantage of the moments between heavy rains to eat something. We planned for today a typical driving day. Again, we found out that the roads are poorly marked, which resulted in extra miles, but thanks to it we found a nice route and we ate breakfast in a charming place. 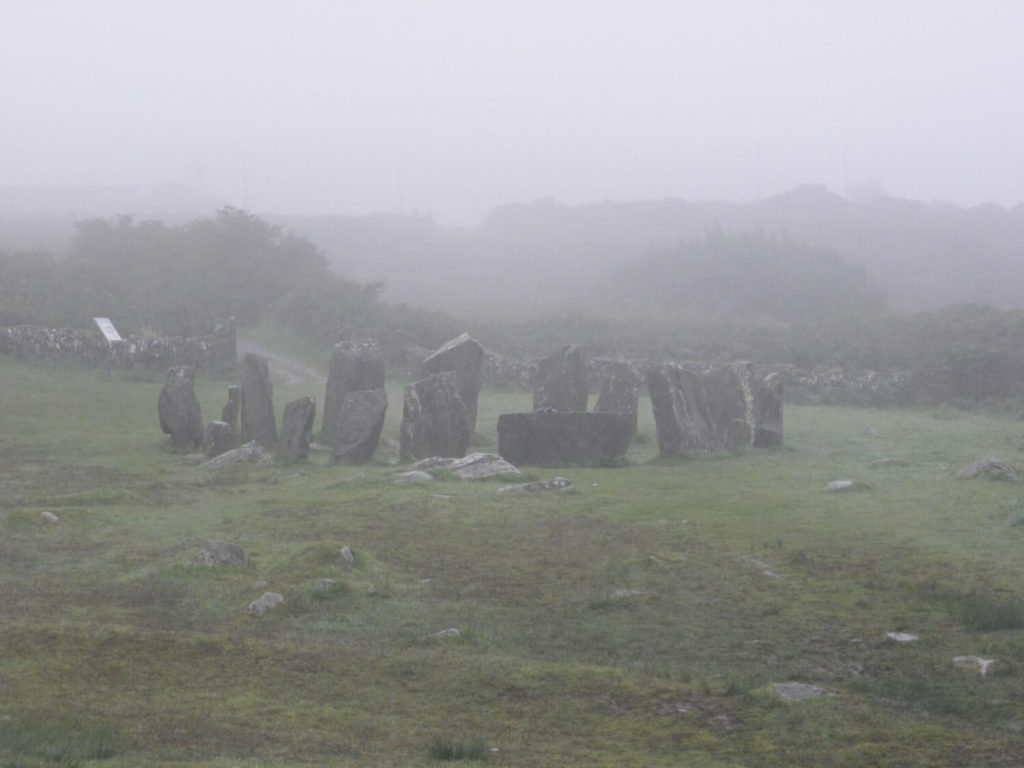 Unfortunately the drive wasn’t going well, knees and shoulders ached and the rain instead of easing was getting heavy. We managed to take pictures of the ruins and small graveyard in Fearna, on the N11 road. We also came across the Dromberg Stone Circle (by the R597 road). Unfortunately it rained so heavily by then, that it was impossible to take a decent photo :( Soaked to the skin, we decided to stay in B&B to get dry.

Oh, it was hard – the whole previous day it rained, it rained all night and all morning it rained heavily. We waited a bit, and then dressed in rain suites we set off. Fortunately, with every mile it was clearing up more and more. 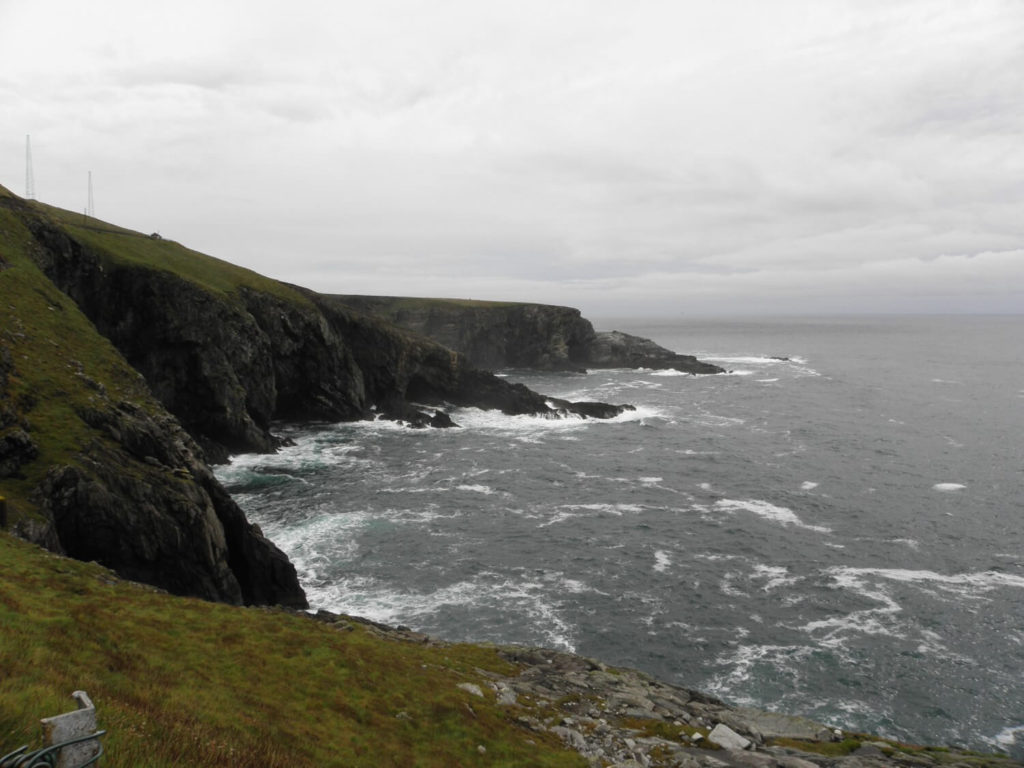 Today’s attraction was Mizen Head – Ireland’s point farthest to the southwest. A nice scenic route led to it. Mizen Head is a place full of charming cliffs, where once a lighthouse stood, now there is a tourist centre, which by the way is worth a visit.

From there, through Bantry, Castletown we headed towards Dursey Island, which is connected with mainland with a cable car. Unfortunately, it was out of service due to general maintenance, so we just had a look, took some photos and set off. We drove along the cape heading towards Kenmare. About 6 miles before the city we came across a campsite. As it was wet everywhere, the camp meadow was very wet, so the owner took pity on us and offered us a small cabin instead of a space for a tent. We were very grateful to him for that, especially when we assessed the damages made by yesterday’s downpours, and it was bad. 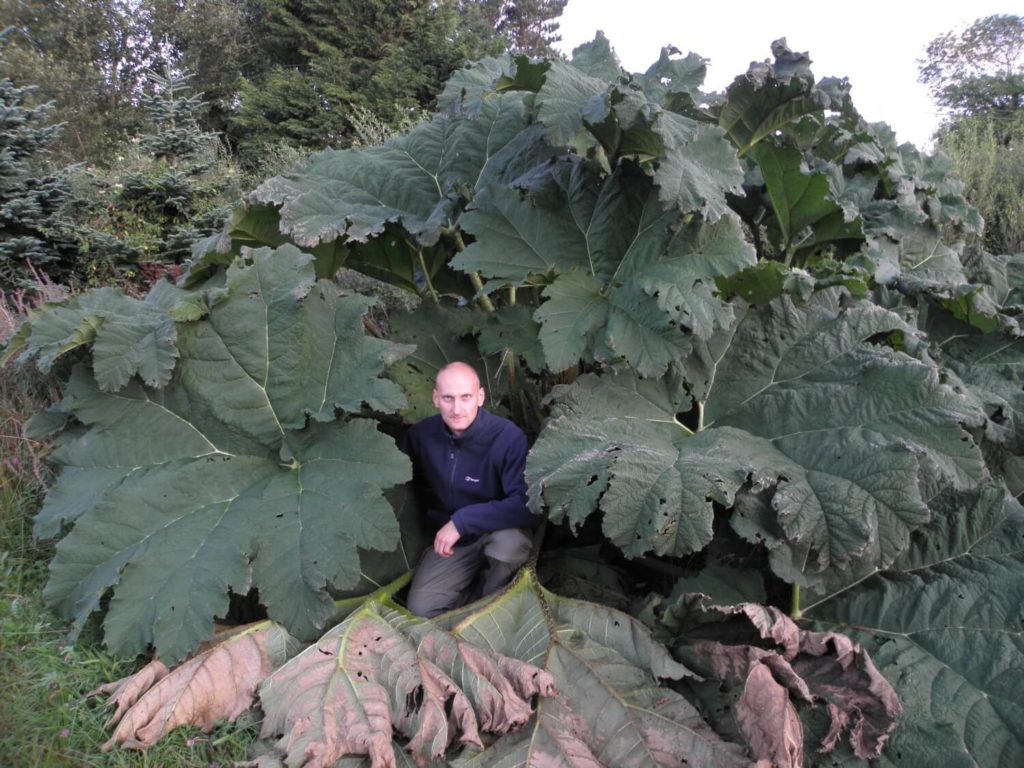 The tent was all wet – while it wasn’t raining we set it up to dry it up a bit, and what was worse, we found out that Marcin’s sleeping bag was all wet, which meant excluded from use. We had to sleep under one sleeping bag. We were very grateful for the cabin. We fell asleep hoping for a nice weather.

INTERESTING FACT: In Ireland there are huge wild rhubarbs and lot of ferns – they cover large stretches of land

The morning greeted us with rain, again:( it rained so heavily, and only rarely it brightened up, but literally for two minutes. We took advantage of the luxury of waking up in the dry cabin, we had a nice breakfast and we looked through the window waiting for the moment when it stops raining. We used the moment of a short sunny interval – quick packing and we were on the road again. Much to our delight the sky began to clear and it stopped raining eventually, although it was cold. 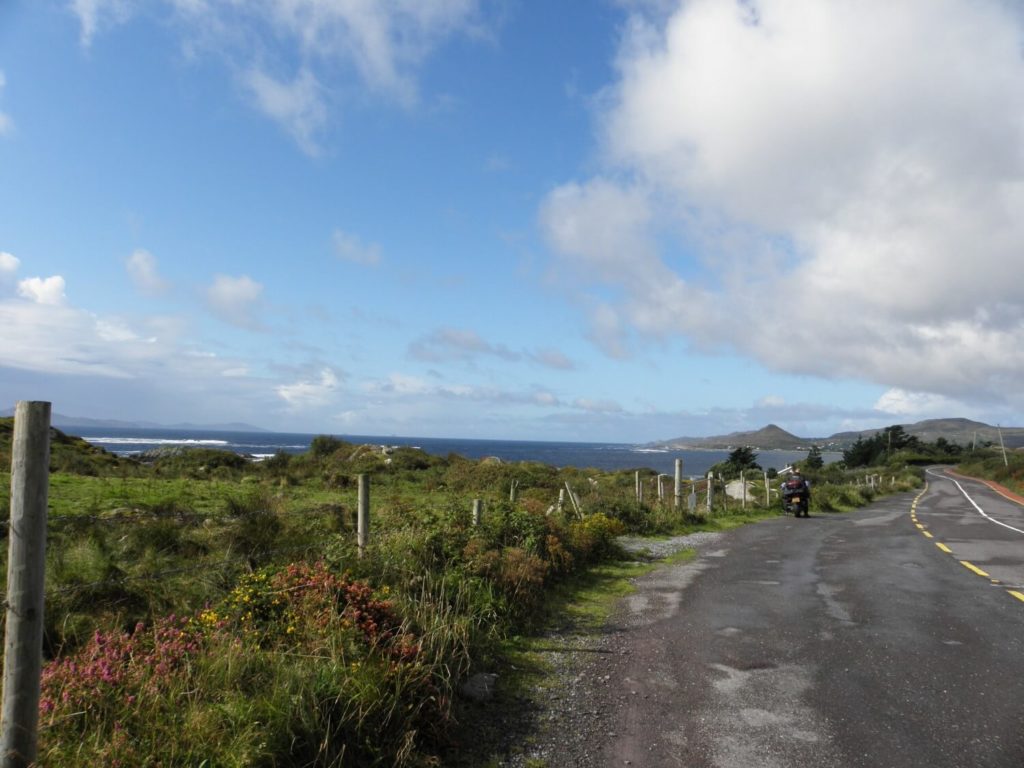 That day was full of great views, and finally we could admire the blue sky over the Ireland:) We drove around the cape following the Ring of Kerry, which is really worth seeing, especially the coastal sections. The sun cheered us up, the drive was really nice, so nice that we missed the way we wanted to go to the mountains. Never mind – quick change of plan, little detour, thanks to which we found a nice place for a picnic. Finally we found our route. 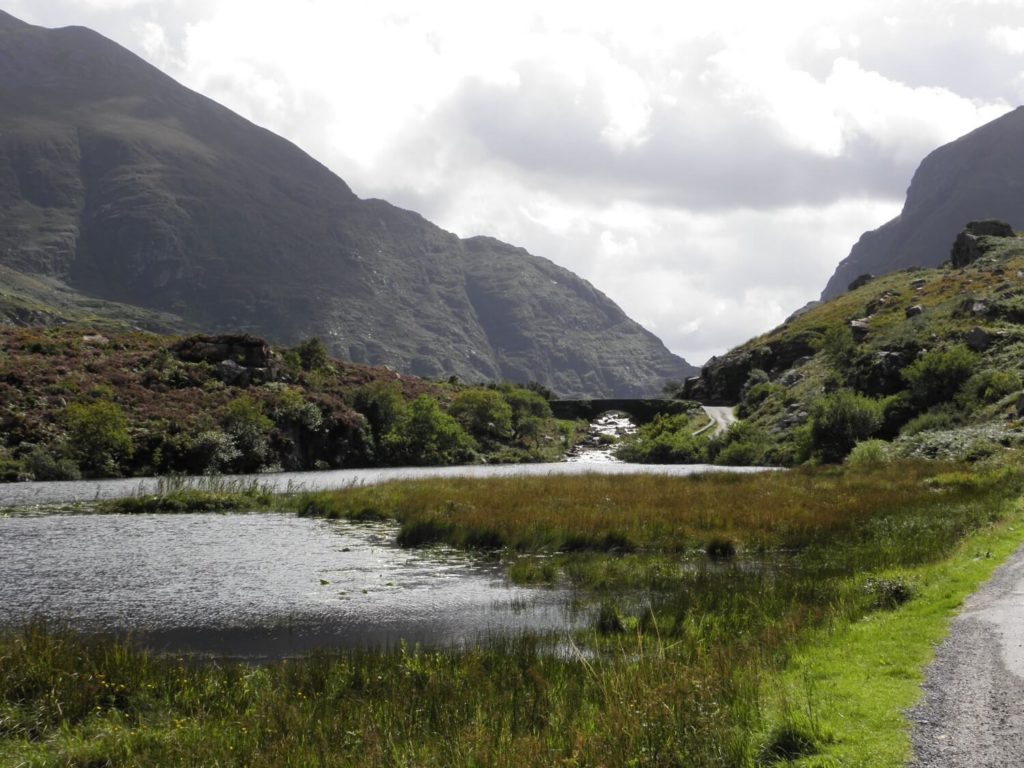 Our destination was Gap of Dunloe – a place that stays in our memory. The narrow road meanders along the creek in the charming valley, fairy-tale like scenery. The creek is criss-crossed by stone, beautiful bridges, all around mountains, greenness everywhere and blue, nearly cloudless sky. You need to be careful there though, because the road is very narrow, winding and not the best quality, with lots of tourists, walking, cycling or traveling on horseback.

We got back on the N71 road, and then turned on R561 heading towards the Dingle Peninsula. Along the way we came across a fabulous beach in Inch, we drove straight to the beach and we admired the big waves, bathed in sunshine, crashing on the shore. The further way turned out to be very scenic, so the drive was very nice and fast. It took us some time to find a campsite, we arrived there just after 19.00. We were very pleased with the passing day, because it was dry and gave us new hope, that after all we will relax on our holiday and will see something.

Our hopes were in vain. It rained from the early morning. We packed our tent dressed in rain suites, still hoping that behind the next mountain we will be greeted by the sun. Nothing like that… We gave up the idea of completing the tour around the cape and we went the main road. 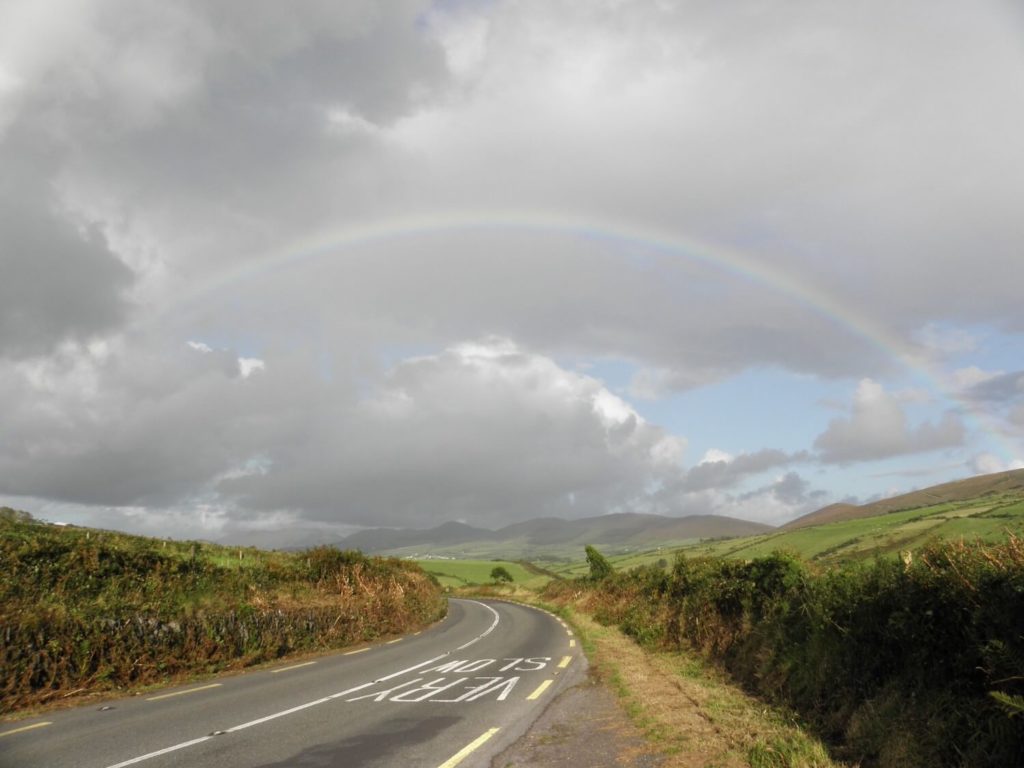 The rain did not stop, the roads changed in to the rivers, the visibility was getting very poor and our clothes getting wetter… it deprived us of the hope that the weather can still improve. Soaked through, cold to the marrow we decided to cancel our trip. There was no point to continue our journey for the sake of driving in the rain, unable to stop to admire the views, since there was nothing to be seen. After a quick recalculation of our route we moved towards Limerick and then took the shortest route to Dublin. It did not stop raining not for a moment. Tired, hungry and soaked through – every mile became a chore, but we wanted to get as far as possible. We stopped about 50 miles from Dublin at B&B and we dried out some of our belongings.

Today’s plan was to get back home, “dry-shod”. We set off in the early morning in the direction of the ferry, hoping to catch the next one. Ireland as if to convince us that it is not that rainy at all – said goodbye to us with the sun, but it was still cold though. We arrived at the ferry port. We rebooked our tickets without any problems, but we had to wait about 2 hours for the next ferry.

And so our adventure in Ireland has ended. It seems that we won’t go back there so soon.